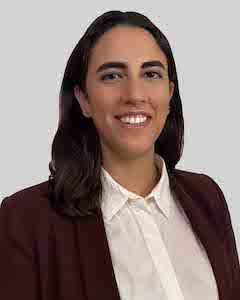 Lori Baitarian is an associate at Lax & Neville LLP, with a practice primarily in securities and corporate disputes before the Financial Regulatory Authority, the American Arbitration Association, and state and federal courts.

Prior to joining the firm, Lori gained experience within leading arbitration practices in the Middle East and New York. She has worked on complex arbitration matters ranging from investment treaty cases to commercial cases before the ICC, LCIA and SIAC.

Lori graduated with an L.L.M. from Columbia Law School where she served as a board member of the Columbia International Arbitration Association and worked as a research assistant to Prof. George Bermann. She received her Bachelor of Laws (License Libanaise en Droit) from the Lebanese University.

Lori is fluent in Arabic and Armenian, and proficient in French.

Contact Us
Practice Areas
Client Reviews
★★★★★
The Lax & Neville team were total professionals in handling our case. They've clearly had quite a bit of experience handling complex legal matters in many jurisdictions and courts. I was impressed with their professionalism coupled with persistence in arguing a very complete and well-structured case. I highly recommend their services. Anonymous
★★★★★
I am very, very happy with the outcome of my case and my experience with Lax Neville could not have been better. The entire team of attorneys and staff are real professionals, they always had time to answer my many questions about my case. I was treated with compassion and respect. I am so grateful I chose to work with Lax Neville. Anonymous
★★★★★
This is an official " thank you" for all your hard work. It really was a pleasure to have you represent me, and I enjoyed seeing you, Rush and Sandra in action. I think Lax and Neville epitomizes the phrase "quality vs quantity". I think I told you before that I spent a lot of time researching firms; in this case things worked out, I picked the best firm. I hope I never need your services in the future, but if I do I know I found the best attorneys for these types of legal issues. Anonymous
★★★★★
What transpired at the [redacted] was nothing less than a truly masterful and exceptional experience regarding your intelligence, professionalism, preparedness for my case, teamwork and erudite knowledge pertaining to Securities Law, FINRA and the SEC. The facility and ease of how the case was handled, the systematic questioning of all the witnesses to obtain the facts necessary to prove our case, the preparation of the critically conclusive information and documents, the commanding coup de gras closing argument and your tireless consideration and respect for the Panel and [redacted] was, is and will continue to epitomize my feelings and conclusion that what transpired over those long three days was nothing less than raw and unabashed brilliance. Anonymous
View More
Submit a Law Firm Client Review